Brought To His Knees

11 Author Box-Set For A Limited Time Only

Amazon and ARe Bestseller

"Like" our Face Book Fan Page for giveaways and up-to-date information.

Subscribe to our Wordpress page for updates on future box-sets! 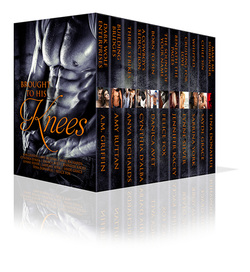 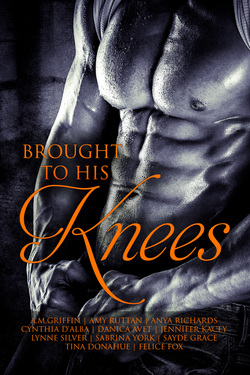 The Alpha male. Strong. In control. Letting no one and nothing rule him…until he meets the one, and all bets are off. The world tilts, the bed rocks, and suddenly that tough guy finds himself Brought to His Knees—in more ways than one. 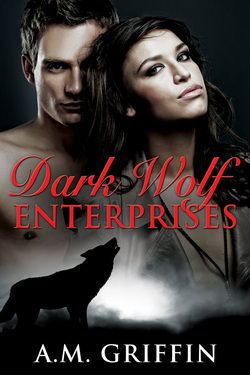 The big break Trudy Hollander’s small accounting firm needs has finally arrived, but unfortunately it comes with murder, mayhem and Kristof Farkas, a man she just can’t seem to resist. Even worse, Kristof is the CFO of Dark Wolf Enterprises—the one person who can pull the plug on the job that will take her company to the next level.

Kristof has no intention of giving in to his inner wolf and claiming Trudy. She’s human. Too fragile to withstand being a shifter’s mate. But the need to protect her is stronger than his resolve, and his desire is more powerful yet. He’ll fight with everything he has to keep her safe, both from those who would hurt her, and from himself.

Other Titles Featured in Brought To HIs Knees

A vet tech and a lone wolf rancher ride out a sudden storm, but can they weather the emotions they stir up in each other...

Vet tech Molly has the hots for new rancher William, even though he’s ornery and a bit of a lone wolf. She’s willing to take a chance and enjoy a stolen moment of passion in his arms, but she’s having doubts about leaving everything she knows behind to follow her dream.

William has saved up for years to finally get his grandfather’s ranch up and running again. Escaping into the foothills of Alberta is a good place to hide from the ghosts of his past. All he wants is to be left alone, but that’s kind of hard when a sexy vet tech seems to be always around.

After a sudden storm during an Indian summer forces them indoors, the temperature inside the cabin begins to rise. William helps Molly see that her dream is worth pursuing while she shows him maybe he doesn’t have to be alone after all. As the temperature plummets William gives Molly one ride she’ll never forget.

Two lonely men. One secret affair. Irresistible passion that will push them both to the breaking point, and beyond.

A knife attack left ex-Jamaican Posse member Vincent Williams scarred and also made him re-evaluate his life. He’s out of the gang and also the closet but lonely, yet to meet a man who’s interested in more than a one-and-done, a brief sexual encounter.

Because of his career as a police officer, Sergeant Kyle Pictou is afraid of coming out. Normally he doesn’t play close to home, but something about Vincent compels him to take a chance. It’s just sex, after all. Yet, as desire evolves into friendship and seemingly boundless passion, it’s Kyle who’s left wanting more—though he knows he can’t have it.

One exhausted cowboy + One uptight account x A tropical resort = A hot seduction. But who is seducing whom?

Brock Wade has raised his brothers and sister since their parents’ deaths fourteen years ago. All work and no vacation can make a cowboy a tad grumpy, or at least that’s what his family and crew believe. Brock wants to spend the two weeks before Christmas working as usual. Instead he’s forced by his siblings to take a vacation to the Sand Castle Resort…a vacation he doesn’t want to a Caribbean resort he’s never heard of. He’s sure he’ll be miserable the whole time.

Natalie Diamond is dreaming of getting out of icy Memphis and down to her parents’ oceanfront condo for a couple of weeks of rest and warmth. When her parents accept an out-of-town invitation, she’s sure she’ll be stuck at home watching it sleet and snow. But instead of leaving Natalie shivering, her parents send her on an all-expense paid trip to the Sand Castle Resort.

A casual friendship over drinks rapidly evolves into a hot seduction, which is great until feelings get involved. When vacation is over, Brock and Natalie are forced to make the difficult decision to walk away or see where life might lead them.

But falling in love in two weeks isn’t possible. Right?

A tomboy in love makes a desperate attempt to seduce her best friend and succeeds beyond her wildest dreams. But this Alpha male isn’t easily tamed and has secrets that could very well tear them apart.

Just another one of the guys. That’s how Taylor Guillory has always been treated in her hometown of Grand Terre, Louisiana. And for the most part she never minded until Sinclair “Sin” Rivas opened up shop in town. With his dangerous eyes and legendary sex god status, Sin is so far out of her league, but that doesn’t stop Taylor from falling in love with the impossible man, or doing something so daring and unlike her for the chance to be with him.

Knowing he’s no good for her, Sin has stayed far away from Taylor since the day she walked into his shop, but when the little spitfire propositions him in the middle of the bar, there’s no way he’ll be able to walk away from the temptation. But his one-night only rule when it comes to women is challenged by the pleasure they experience, making him think that he might be a one-woman man after all.

But Sin has secrets that could very well destroy anything they forge together. Can a man born of sin find redemption in the arms of a woman just as tough as any man?

The Sound of Your Name

Ellie Donovan couldn’t care less about pro bull riders, until she’s sent out on the circuit to do a story about them for Modern Luxury magazine. She’d done many things to get a great story, but pimping herself out to a cowboy who thinks she’s the only thing keeping him on track for the gold buckle isn’t one of them. Being sexy Brody’s good luck charm isn’t exactly a hardship—until she discovers she doesn’t want it to end.

Brody Cameron can’t help bowing to cowboy superstition on the night he should have lost his spot on the pro circuit, when a secret tryst with a pretty stranger changes his luck, and his heart, forever. Caught between the love he wants and the money his family needs, Brody can’t share the truth with Ellie and risk losing his shot at the big money.

But when Cameron family secrets are exposed, and a jealous rival threatens to tear them apart, can Ellie and Brody break their silence without breaking each other’s hearts?

One wicked night with her did nothing but whet his appetite. Now he’ll settle for nothing less than her complete submission.

Acacia owns and runs Fame, one of the hottest celebrity magazines in the country. She survives on convincing the rich and famous to reveal things they would normally do anything to keep hidden. She lives, eats and breathes the magazine. Day in and day out. She has no life, nothing to keep in the dark. Nothing but the night she gave herself over to the one man she never should have wanted.

Radigan, the most sought after actor in Hollywood, wants her again, and won’t take no for an answer. He had her for one night. Several hours of the best sex of his entire life, but she was gone the next morning before the sun had fully risen. His attempts to contact her have gone unanswered. Everything he’s tried so far has been a miserable failure. But he finally knows what to do to slip beneath the pages of her heart.

This time he’s playing for keeps and the exclusive rights to her body, heart and soul.

When Andi Greene heads out on a cruise, she’s pumped for a fun week of sun bathing and chilling with her best friend. Little does she know her best friend has a number of surprises in store. The first is the cruise’s theme of bondage and domination. The other? Ship’s doctor Jonah Coleman, Andi’s first love, her high school boyfriend—the boy she thought she’d marry before he moved across the country and eventually dropped her cold. But there’s nothing cold about their reunion. Instead sparks fly, and Andi’s relaxing cruise seems set to turn into a week of hot loving.

Jonah can’t believe he’s getting a second chance with Andi—a grown-up Andi who might need more than he knows how to give. But he’s willing to put everything on the line to find out if the heat between them is just the remnants of teenage love or something more. And even though he has to let her go again, he’s determined this time she’ll never forget him.

A scalding attraction. An irresistible passion. A pity she’s the one woman he can never have…

Dane swears he will never suffer the same fate. But when he meets a woman who can take all his dominant loving and beg for more, he realizes he may have met his match. It’s a damn shame she’s the one woman in the world his man-code deems untouchable…his best friend’s sister.

A taste of Sin isn’t enough. Instead she wants all of him, including the heart she once broke.

Mavis Tanem has the world at her feet. She’s young, wealthy, and independent, yet none of that means anything. Years of seeking revenge against her father have left her cold and hard. There’s no place in her life for softness—for love. Yet when her brother goes missing she’s forced to go back to where it all started. And back to Bowie Sinet, the man she broke.

The devil was back in Tanem, Texas and Bowie is ready for the smart-mouthed and sexy as hell woman who’d torn his heart to pieces. As sheriff he’s used his handcuffs for a lot, but what he wants to do with them and Mavis might just be against the law, in more ways than one.

A single night is too much and yet not enough for either of them. They both know it’s too late to change the past, but maybe together they can exorcise the ghosts that haunt them, and find some peace.

When it comes to two of the hottest guys in town, she has a proposition…to win their attention, passion, hearts.

For over a year, Mercy’s had her eye on Travis and Dutch, two of the hottest guys on the Oregon coast. Dark and dangerously virile, Travis owns a saloon that caters to bikers. Dutch looks like one, right down to his impressive tats, and operates a motorcycle repair shop on the premises.

When a position opens in the saloon’s kitchen, Mercy sees a way to be near these sinfully sexy men, wanting the job and lodging, her cabin snuggled between theirs.

Travis isn’t so sure about having Mercy nearby. She’s deliciously curvy, but too nice. He’s into temporary fun. To Dutch, forever is a dirty word.

Imagine their surprise when sweet little Mercy encourages wild nights of carnal pleasure with a dash of bondage and spanking…followed by friendship and tenderness.

Before she’s through, these tough guys won’t know what hit them.